They’re famously slow, but it’s surprising how quickly Giant Tortoises can move once they’ve spotted their breakfast. This was feeding time at the Galápagos National Park and I was lucky enough to volunteer there as part of a conservation project run by the Jatun Sacha Foundation on San Cristóbal. I like this picture. With that backpack on, I look like a tortoise myself.

The volunteer work has been one of the toughest on the trip so far. It’s based at a biological station in the middle of the forest. Mosquitoes are rife. There’s 90% humidity too. Using a machete is like trying to swing a golf club in a swimming pool – but it’s necessary. Conservationists here say some birds are extinct or endangered because trees like Scalesia have gradually disappeared. So, we’ve been cutting down invasive plants like mora (blackberry bushes) so that endemic trees can be planted instead. The only problem is that these thorny thickets tower over your head. It’s a challenge. Another challenge is getting up close and personal with all the wonderful creatures that nature has to offer. Let me introduce you to my roommate:

It was the largest of the little gang that was awaiting my arrival. I asked another volunteer if there were any poisonous spiders at the station. “No,” she replied, “although they did find a type of black widow in somebody’s boot.” That would be a ‘yes’ then, surely? 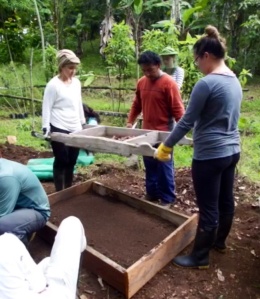 The conservation project also works with local landowners to help them develop organic farming methods, so that they can sell their produce to restaurants and hotels. It also promotes sustainability by growing its own fruit and vegetables. We’ve been picking pineapples, passion fruit, oranges and bananas but some fruit is best left alone. 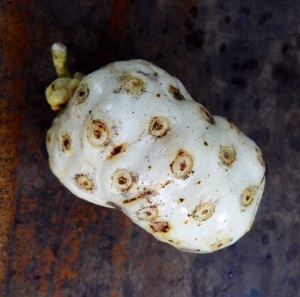 This is one of the smelliest you’ll ever find. Its called noni fruit and it smells like rotting cheese. Despite it’s aroma, it’s loved by many. It’s said to have medicinal or anti-ageing properties and this little specimen apparently costs $60 in the shops.

So, in the middle of a forest, with no shops and temperatures of 80f, how did they manage this?

It was my birthday last week. It may have been one of the hardest projects so far, but I felt very lucky indeed.