It was just like a science lesson – at least that’s what I kept telling myself. I was hunched over a dead wildebeest cutting off its hind leg with a pocket knife. It was a long process but there were five hungry lions that needed to be fed. They were living in a boma and couldn’t fend for themselves.

Piece by piece, the big beast was thrown over the electric fence. The lions shot out from under the trees and dragged the fresh meat back to their hiding place. There were fights of course, but they were full. This is the dirty side of the volunteer work in Kwa Zulu Natal. 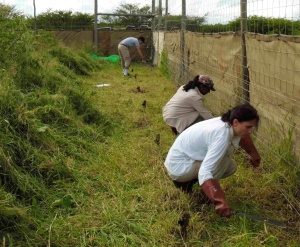 A few days later, the lions were released from the enclosure and the clean up operation began. It was a bit like cleaning up after your own cat, but with big bones scattered around the place too. Then came the grass cutting, paying particular attention to the electric fence which had been helpfully turned off. No machinery here – just scythes and machetes. Unsurprisingly, I’d never used a machete before I started this project. Now, it’s routine. What is surprising, is that I haven’t seriously injured myself. 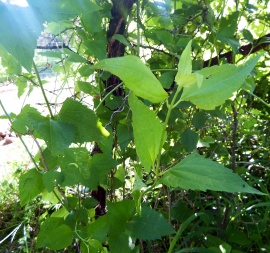 It’s a handy tool to help get rid of this stuff. Chromolaena looks pretty, but it’s a pest. It originally came over in animal feed from South America and has spread. It stops indigenous species from growing and it’s flammable – an unwelcome addition to the bushland that’s susceptible to forest fires. 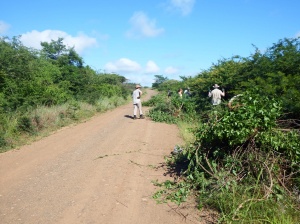 Every week, we dodge the spiders, ticks and thorns to pull it out by the roots. It’s a hard job. We all hate it! Yet the dirty work does have its rewards. 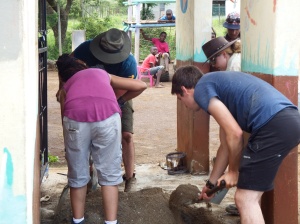 This is a crèche we’ve been helping to refurbish in the nearby town of Mange. Mixing cement by hand in 30c temperatures wasn’t easy, so being stopped by local children who wanted to play, was a welcome distraction. 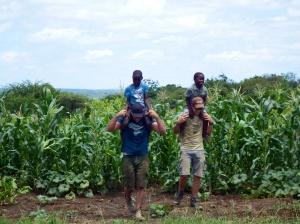 The crèche is run by local women to educate small children – some of whom have been orphaned. Our cement path was just a minor improvement, but it put a huge smile on our tired faces.

2 thoughts on “Getting my Hands Dirty”