It’s an outbuilding, not a waiting room and the patients don’t have the luxury of privacy either. This is a mobile clinic high on the hills of Etshaneni where dozens of people – mainly women and children – are queuing to see the nurse. It’s the only chance they’ll get for a fortnight and many of them have walked fifteen kilometres to get here. Forty per cent of people living in this area have no choice but to make that journey. They have HIV. Sadly, that’s a good sign. The doctor says that five years ago, it was seventy per cent.

We’ve been invited here by The Happy Africa Foundation which is raising money to refurbish the dilapidated building and make it a more permanent centre for clinical treatment. 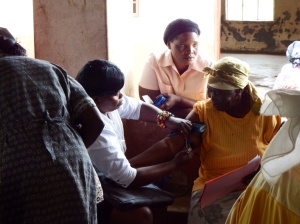 Almost everybody has to have their blood pressure checked on a regular basis. Hypertension is common, even amongst fifteen year olds. A poor diet based on maize, salt and oil doesn’t help. 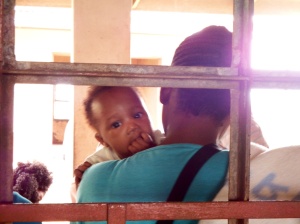 That’s why vitamin A supplements are handed out to children up until the age of five. Its hoped it will strengthen their immune system and improve their eyesight. However, the doctor explained something distressing about some of the babies born here. A high percentage of the mothers are still teenagers and as young as thirteen. What’s worse, is that in Kwa Zulu Natal there’s a real problem with girls falling pregnant by ‘sugar daddies’ – older men who exploit them by offering to pay for things like schooling. Apparently, some of these girls are particularly vulnerable, because they are orphans who’ve lost their parents to AIDS. What they don’t understand, is they’re at risk themselves.

The medical staff stay for as long as they are needed and on this occasion, it was likely to be some time. As we were leaving, more were arriving. A lot of us on the volunteer project have talked about how we take things for granted back home. It really is an understatement.

1 thought on “Life Outside the Game Reserve”