After almost four weeks in India, I thought I’d seen everything. How naive.

As I was elbowing my way through Jaipur’s Siredeori Bazaar, I was aware of something large looming on the horizon. It was an elephant. An elephant was making its way through the rush hour traffic. I dashed down the street to catch it on camera – much to the amusement of the local shopkeepers who were shouting, “Here, here!” and found me a good spot outside the Hawa Mahal. After it plodded past, I stood there chuckling away to myself, mainly because its rider was also on his mobile phone. One of the shopkeepers asked me why I was laughing. “This is India!” he said. 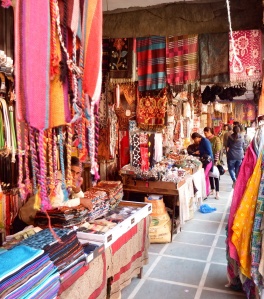 He was so right. Why was I surprised? It’s a colourful country in every sense of the word and as I weaved my way through the textile shops of the Pink City’s bazaars, I thought I was walking into a kaleidoscope. I then found gems, bangles and bracelets, dried fruits, spices and juices. I was warned that sampling street food was like Russian roulette, but what would you do if you saw a sizzling pan of Kachori right in front of you?

A deep fried oniony dumpling is the best way to describe it, but my highlight was this sugary oasis at Bapu Market:

LMB is quite well known. What I love, is that you can just wander around, pick whatever you want and then go to your cocktail table to devour it. I chose a nutty, biscuity, Shahi Pinni and a sweet lassi. It was the best lassi I’d ever had – deliciously creamy with an extra dollop of cream on top, just for good measure. I had a headache by the time I got home, but it was totally worth it.

The next day, I had one of the best cinema experiences of my life.

Welcome to the Raj Mandir. A glamorous theatre that even sells cake. I don’t know what was more entertaining – the movie Gunday or the audience itself. As soon as the lights went down, there were cheers. As soon as the heroes appeared, there were cheers. People were shouting from the back, people were replying from the front, they were taking pictures of the screen and taking calls on their phones. It was chaotic and I loved it. We can get a taste of India back home, but there are some things you just can’t replicate.